For generations before axe first struck timber to develop the current civilization of Manitowoc, Wisconsin, the land was inhibited by culturally rich indigenous people. To commemorate those who once inhabited the area and so graciously protected the land, the bronze monumental sculpture Spirit of the Rivers  is being built on the shores of Lake Michigan (read more about Spirit of the Rivers here). While the craft of the monument radiates beauty and grandeur through reflection of indigenous culture and a powerful display of realism, the structural stability has yet to be analyzed to ensure it will stand the tests of Mother Nature and time. 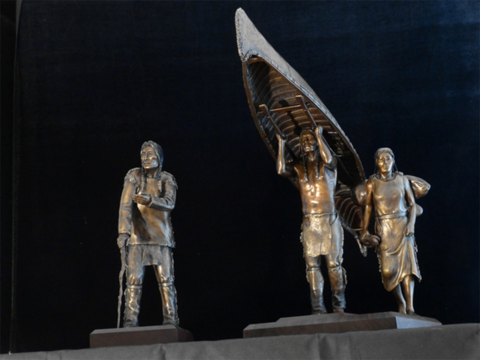 1/8th scale miniature of the Spirit of the Rivers monument

There has been some unease within the Manitowoc area as to how stable the upcoming monument will be. Not only is the sculpture going to be of a significant size, it will also be carrying a great deal of weight. To test for areas of concern in the design, as well as some of the more extreme Wisconsin conditions, a wax model was built and 3D scanned into a precise digital model. This scan was eventually given to the team at Intact Solutions, and we have now performed a structural analysis of the bronze statue. 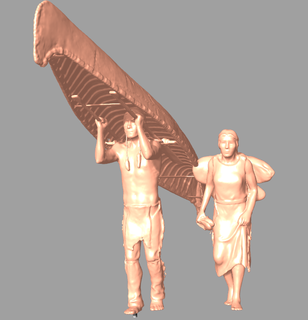 The digital model created via 3D scanning was scaled to size and manipulated to the desired artistic dimensions. The cast bronze was modeled as 1/4" (6.4mm) thick. Two stainless steel beams, one running from the foundation, entering the portaguer’s foot, and exiting through his head; and the other running along the interior hollow section of the canoe were added for support. 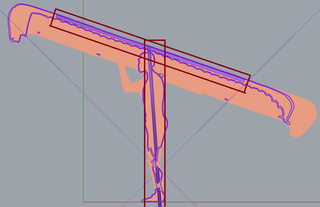 The Rhino 3D model was analyzed as a welded assembly of multiple materials in Scan&Solve Pro. Four cases were considered: gravity alone, side wind and gravity with and without the beams, and front wind and gravity. The wind generated forces were determined from coefficient of drag calculations for 90 kph (55 mph) winds. 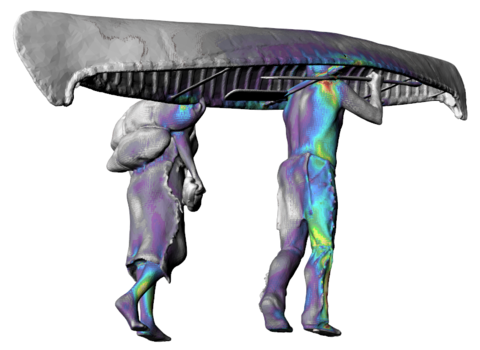 Stresses due to only gravity

The first simulation with gravity alone highlighted the primary areas of concern, indicated by red. Notably, the high stress regions were in the portaguer’s right ankle and where the canoe rests on his right shoulder, as well as in the woman’s right ankle. The shoulder region has a high stress because of the relatively small area the weight of the canoe is being applied through. This is partially alleviated by the vertical supporting rod. 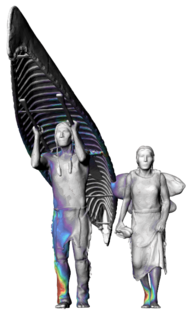 Stresses due to wind blowing from side and gravity

The deflection and load for the case where the wind is blowing to the front of the statue are shown below. Here, the deflections are multiplied by a thousand for visualization. The true predicted deflection is less than 0.8mm (1/32”). Most of the deflection shown is due to gravity – the back of the canoe is being pulled down, and also pulls the woman down and to the side due to the welded connection. For this load case, the front wind load causes the peak stress in the sculpture to be in the front of the woman’s right ankle. The stress in the portaguer’s ankle is actually lower in this case because it is more evenly distributed. 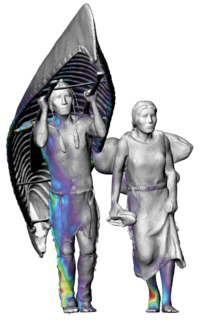 Comparing the side wind load case with and without the support beams shows that the beams are able to reduce peak stress in the monument by almost a factor of two. In addition, the peak deflection in the statue was significantly reduced by adding the support beams. From an artistic sense, this is preferred since the statue deforming under its own weight would not necessary represent the original intent.

Structurally, the monument will be more than sound. Our analyses indicate that there is a considerable factor of safety in the statue, showing that it will stand the test of time. We look forward to seeing the monument when it is completed!

For more information about the Spirit of the Rivers monument, you can see their website here. If you are interested in analyzing multi-material assemblies in Scan&Solve, check out our free to download Beta version here.