Displaced intracapsular femoral neck fractures in the elderly have a high risk of failed fixation, non-union, and avascular necrosis. A common operation to account for this is a hemiarthroplasty (replacement of femoral head and neck), which is a far less complicated procedure than a total hip replacement, and in most cases returns equivalent results. There are two common femoral hemiarthroplasty prosthesis models used in modern surgical procedures; the Austin Moore prosthesis and the Wagner principle artificial prosthesis (Image #1). 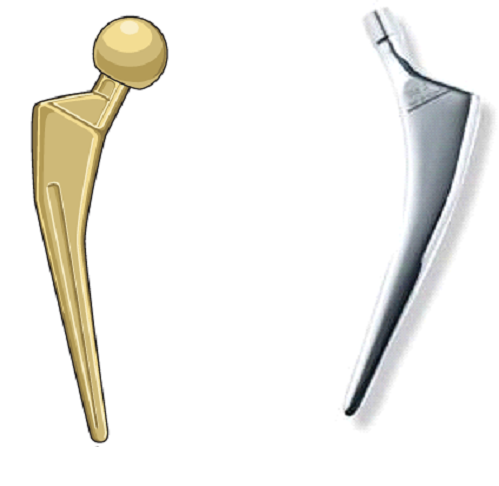 To determine the mechanical advantages/disadvantages between the two geometrically different femoral prosthesis models, Scan and Solve Work in Progress (WIP) was utilized. WIP has the key feature of supporting multiple material selections to be applied on a single design for analysis. This is an essential feature for an accurate stress analysis since the prosthesis is composed of titanium, while the femoral bone is composed of both cancellous (spongy) bone, and cortical (compact) bone.

The first step in this analysis was to obtain a CAD compatible femur mesh. Subsequently, the mesh was separated into 3 parts indicating locations of changes in bone composition; from cancellous to cortical (Image #2). These sections do not need to be rejoined for WIP to function, they just need to be touching. WIP supports material customization, so no material is unavailable to the user. Upon further research, the mechanical properties of cortical and cancellous bone were determined and added to my Scan and Solve material list (Image #3).

Image #3: Display of mechanical properties of cortical and cancellous bone obtained for this research simulation. http://www.sciencedirect.com/science/article/pii/002192909390042D

The final steps prior to executing the simulation is to specify the restraint and force locations. To simulate the vertical force of an individual during a rigorous activity, a 1000 lbs force was placed on the femoral head in the -z direction. Since loads are typically split between both legs, and forces are typically absorbed by muscles over a long period of time, this is a substantial load for a bone to bear. Additionally, The proximal end of the femur is a ball and socket joint (hip joint) which has 3 degrees of freedom, whereas the distal end of the femur is a hinge joint (knee joint) which has 1 degree of freedom, so the distal end was selected to be restrained in all directions (Image #4).

The Austin Moore prosthesis and Wagner principle artificial prosthesis were then manually created via Rhino. After creation, the femur was cut at the appropriate site, and the prosthesis's were implanted, representing the surgery. The previous steps of indicating material, forces, and restraints were repeated. The material selection was the same as the original femur, with the addition of the titanium prosthesis (Images #5 and #6). 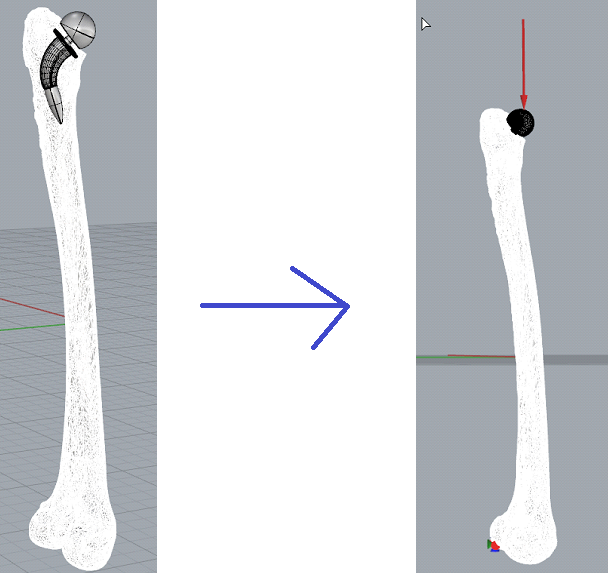 Image #5: The Titanium Austin Moore prosthesis was created and added to the femur (left). The same 1,000 lbs load and restraints were added as to the unaltered femur (right). 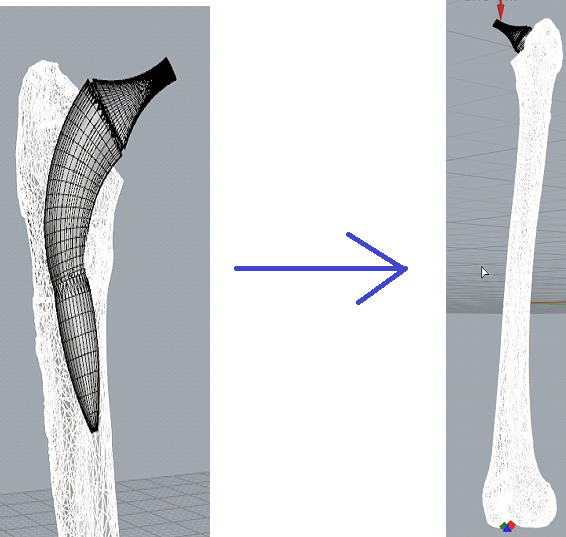 Image #6: The Titanium Wagner principle artificial prosthesis was created and added to the femur (left). The same 1,000 lbs load and restraints were added as to the unaltered femur (right).

The data collected from the simulations was analyzed to determine which of the prosthesis options best simulates the original femur, and less likely to induce failure. In this study, the displacement (Image #7), Von Mises stress (Image #8), and danger level (Image #9) were focused on.

The location of maximum Von Mises stress is marked and value displayed. The color schematic is a visual representation of internal stress, with the darkest red being the maximum value, and the darkest blue representing no induced stress.

The location of maximum danger level is marked and value displayed. The color schematic is a visual representation of corresponding danger levels.  Since the danger level maximum was set to 1, the darkest red represents locations with greater than or equal to the yielding stress, and the darkest blue representing no danger.

To determine which of the two prosthesis options most effectively replaces the femoral head, the displacement, Von Mises stress, and danger level were analyzed.

The net displacement of the femoral head in both prosthesis models are significantly less than that in the original femur (p < .05). In vivo, this displacement is restrained by the hip joint, however for the purpose of the simulation, it was left unrestrained. This allows a visual representation of how the femur would deform, and what additional forces may be induced by the restraining joint. The Wagner principle artificial prosthesis shows less displacement, which is beneficial when enduring large loads, however, bone has a flexible nature that arises form the collagen and elastin fiber interactions, and all of the displayed bending is within a safe range.

The distribution of the 1,000 lbs. load is displayed by the Von Mises Stress. The maximum stress (location where failure would first occur) is shown to be in the femoral head for each of the 3 samples. The Austin Moore prosthesis appears to be the better option of the two prosthesis models due to its ability to better distribute the load over a larger cross sectional area. This reduces the internal stress, allowing for the better handling of large loads. Additionally, the Austin Moore prosthesis displayed less stress in the bone shaft. Fractures in the bone are due to areas with exceedingly large induced stress, so lower stress levels indicate safer locations.

The Danger level (set to 1) displays the locations where the yield stress is exceeded, and failure may occur. in all 3 models, the heads exceed the danger level, and failure will occur. This is expected my such a powerful load on a single leg. The Austin Moore prosthesis, however, better distributes the load than the the Wagner principle artificial prosthesis, and since the titanium head is stronger than the original cancellous bone head, the least amount of failure will occur. The danger level simulation of the original femur displays bright yellow, and a small amount of red in the bone shaft. This indicates that the load is large enough to produce slight failure in the femoral shaft itself. This is not experienced in the two prosthesis models.

The Wagner principle artificial prosthesis is a good option for replacing the femoral head, however will yield and potentially break under weaker conditions than the Austin Moore model. The Wagner model is recommended mainly to those who are less physically active and do not intend to expose it to vigorous loads. The ideal patient for this model would be the upper middle aged individual. The Austin Moore on the hand may be the better option for younger and more active individuals, as well as elders who are susceptible to falling.

Since the failure tends to occur in the titanium prosthesis itself, a possible solution to this would be plasma ionization hardening, or selecting an alternative stronger material. Further studies need to be performed to dictate comfort and functionality of the prosthesis models, however at this time the Austin Moore seems to be the superior model.