This story starts with an unexpected failure, as many engineering problems do.  My hope is to show the great utility of Scan&Solve at every stage of the design process.

Two tabs were being used as a bolt mount attached to steel tubing.  However, the steel tubing failed, causing the tab to break away. The tab appeared to have failed from the bottom first, then the tab separated after flexing away from the tubing. The top tab, now having to bear the entire load, then deformed as seen in the picture below. 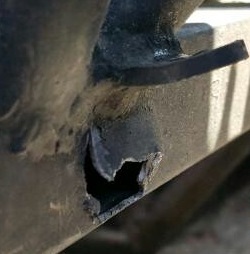 By design, the bolt should have failed first, with a shear load failure of approximately 1700 lb.  Only the portions of the frame close to the failed tab were modeled in Rhino, with restraints chosen to be far away to not affect the stresses around the tab.  The simplified model lets Scan&Solve allocate more elements to the area of interest.  Even so, to avoid numerical singularities, these analyses used resolutions between 100,000 and 400,000 elements.  A more simplified model of the frame could have been used to reduce the length of tubing, thus increasing the grid density near the tabs.

For the initial failure analysis, a 1500 lb load applied from the bolt to the tabs was added in the direction perpendicular to the tubing.  The 1500 lb load was shared between the inner faces of both tabs. However, this result predicted failure would begin to occur at the top edge of the bottom tab. 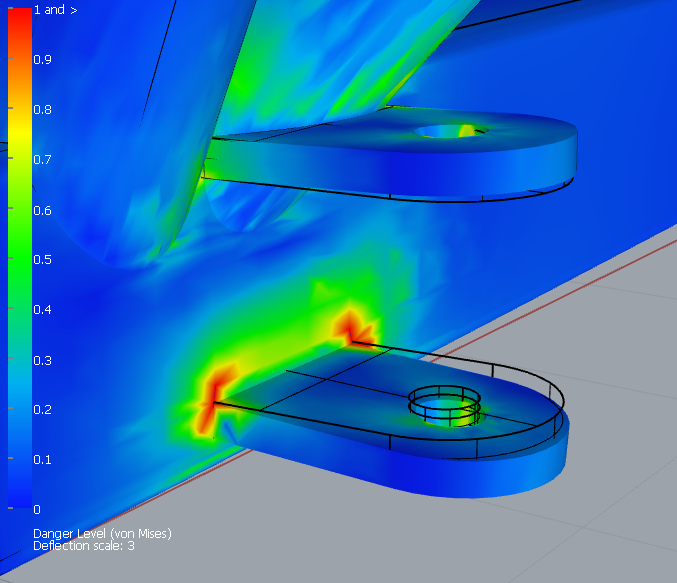 While high enough loads were eventually present to separate the top edge of the tab, it was the bottom edge of the tab which detached first.  This indicates that the loading which caused the failure was not purely perpendicular to the tubing. A 100 lb vertical load was applied to the bottom of the tab, which could be transmitted to the tab by the head of the bolt. 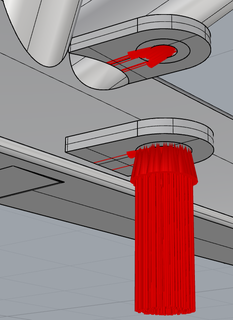 This load case produced a result very similar to the failure observed.  The vertical load changes the failure location to be the bottom corner of the tab, and begins to induce a tensile bending stress at the bottom edge of the tab. This high stress level is maintained throughout the thickness of the steel tubing, indicating that the stress concentration is not merely a numerical artifact of the sharp boundary between the tab and tubing. 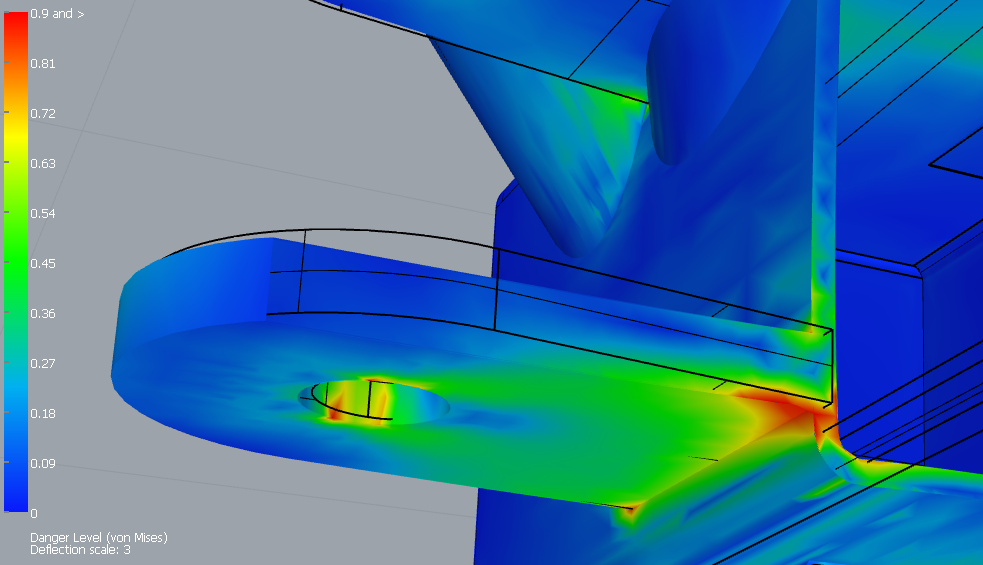 So, how do we alleviate this issue?  An alternate tab design was considered.  The tabs would be created as a single U-shaped piece and then welded to the tubing.  However, with the 1500 lb horizontal force and 100 lb vertical force still present, the analysis of the new design showed that the tubing would fail in a similar manner as the original design.  The tensile bending stress caused by the vertical load will still be large enough to cause failure near the bottom edge of the tab. A view inside of the tubing is included below.  The high stresses are maintained throughout the width of the tab, and are present on the inside and outside surfaces of the tubing.  Although this U-shaped tab was not the design which failed, the stress concentrations are consistent with the failure that was observed. Essentially, there is no simple fix that will make the frame resistant to this particular failure.  The ideal solution is to change the geometry causing the vertical load to occur, thus eliminating the bending stress within the tubing.  An alternative solution is to increase the thickness of the tubing in this region to better distribute both the bending stresses and horizontal stresses.

However, those analyses will have to be a blog post for another day.  Hope you enjoyed the read,