Benchmark study among SnS, SW Simulation 2010 and Comsol Multiphysics 3.5a

I made a benchmark study among Scan&Solve and two simulation software I usually use: SolidWorks Simulation (2010, 64 bit) and Comsol Multiphysics (3.5a, 64bit).

The study is related to a vehicle coupler (3D model) with many small features and fillets.

The coupler is fixed in all directions on the ring slot, and pulled along x-axis on both coaxial cylindrical holes with 20kN (applied on half cylinder). Moreover, both inner planar faces of the coupler are constrained in z direction (to simulate the presence of the mate coupler). Steel AISI 1020 material is assumed. See figure.

- In SW Simulation a h-adaptative mesh analysis was performed as previous results were depending strongly from the mesh adopted in the more stressed areas.

- In Comsol some issues were found to mesh the model and a tuning manual set-up of mesh parameters was necessary to mesh small patches.

- In SnS the maximum resolution was set and the element size of the basis functions is much bigger than the average mesh size set in the other software.

From the comparison one can see the very good agreement between SnS and Comsol results (benchmark_grid), whereas some significant differences arise with SW Simulation. On the other hand, SW simulation is supposed to give the more accurate solution as the mesh improvements are made automatically through the h-adaptative method, not adopted in Comsol. Consider, moreover, that SW and Comsol got the same maximum x-displacement, and displacements are usually considered the more reliable results in contrast with stresses.

While testing SnS I faced out with the following issues.
1) After running an analysis, if I modify the model (just moving a face, for example) and a lunch again SnS on that solid, the software show me previous results and doesn't alert me about variations in the model.
2) SnS should allow to save more analyses carried out on the same model.
3) A multi-resolution is welcome to better adapt basis functions to small geometrical features.

thanks for posting me your questions.

In the following my response.

About question (1) I reviewed my SW model and I realized there's a mistake in the run time I reported.

I made the first analysis some weeks ago and I just re-run the analysis before preparing the report, but ... starting from the final mesh SW had generated at the end of the first analysis! Thus it was so fast!
Sorry for the mistake.
I've made a new analysis by meshing the CAD model with some local control of the mesh only on the two vertical holes and around the ring slot (see SW_initial_mesh.jpg) and then running a h-adaptative analysis getting the final mesh you can see in figure SW_final_mesh.jpg. 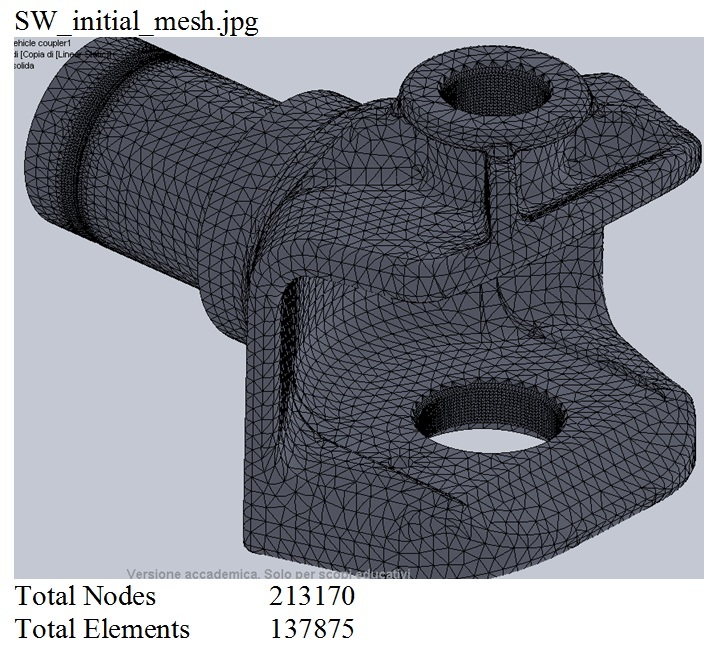 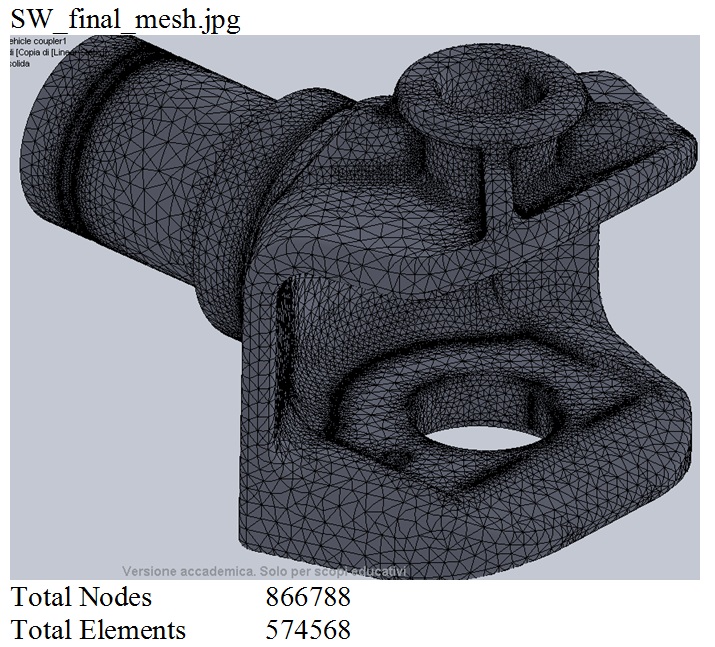 (Of course, starting from a different mesh, the final result, in terms of mesh, is different with respect to the one I posted in the first report.)

I have calculated a total time to get results of about 8 min.

I hope this reassures you about solution times.

About the question (2) please see in SW_meshing_video how tiny holes were automatically meshed in SW (and Comsol as well).

Finally, look at the following figure (in Italian but I hope still understandable) the few parameters the user can set for h-adaptativity mesh analysis. Salvatore,  thank you for doing the benchmarking and posting the results.    We really like to be benchmarked against the much more expensive software packages :-)      But I have several more serious questions:

(1) The SW time seems too good to be true.   Does it include the initial meshing step or only the re-meshing and adaptation step?

(2) I saw some very small holes on the original model.  Were they also meshed by SW and Comsol?  It is difficult to see.

(3) Can you show which parameters you needed to specify for the adaptation to work?

Thank you in advance for clarifying these.