Could someone perhaps give me a heads up on the Stress XX, XY, etc visualisation please?

I've looked up and found a convention on shear stress, where the first numeral is the normal plane and the second the direction of stress.

I must be misunderstanding something however because the visualisation doesn't seem to make sense give the applied load and the coordinate system (kept World Top).

A bit of a foolish question I know, but rather a fool for 5 minutes...

Your understanding of the notation is correct.

In all but the simplest shapes and loading conditions, the internal stress state is non-trivial and a bit mind-bending.  Here is a simple example that may help: 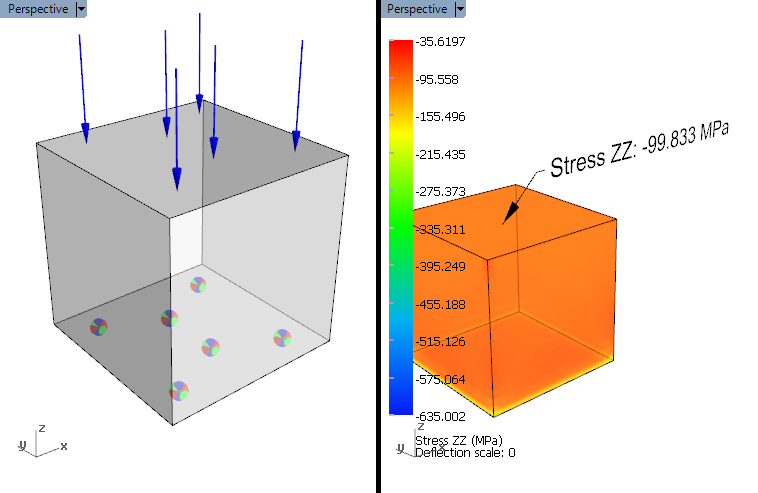 LEFT: The block on the left has a 100 MPa pressure applied to the top face.  So we should expect the normal stress at every point on this face to be very close to 100 MPa.

RIGHT: The block on the right shows the simulation results: Stress ZZ [stress at a point on the Z-face due to a force in the Z direction] = -99.8 MPa.  The distribution of orange indicates this stress is fairly uniform until you get close to the restraint.  The stress is negative because it is compressive.

Yes, that helps, thanks!

The application is adhesive tape on a wall. The load is a Perspex cylinder filled with Perspex discs. We need to get an idea of the tensile forces trying to pull the tape off.

The initial installation was a catastrophic failure. The tape was applied to a 'backboard' but what we didn't realise at the time is that the adhesive on the 3M tape requires a fair amount of pressure to activate. In retrospect we simply didn't and couldn't apply enough pressure to all that tape.

For the second installation I used SnS, looking at principle stresses. That gave us a reasonable FoS of 6 mounting the cylinders individually. Empirically, the three cylinders we'd mounted independently were extremely difficult to remove and easily held my weight.

For seven months everything held. Recently however five cylinders fell off. Some were clearly pulled off because the chances of 5 independent failures is very remote. The one likely real failure was at an awkward junction in the marble (i.e. non co-planar faces).

So what I really needed to know is the YY force where the tape is in pure tension, as 3M give a spec for this. Our own check showed that every cylinder remaining is secure but the relationship with the client is obviously now a little 'stretched' to put it mildly. They have insisted the installation be inspected and signed off by an engineer but to be honest, he's been conspicuous by his absence (e.g. He didn't arrive to conduct testing last night).

Personally, I think it's important to study failure honestly to learn from it.