I have been using SnS for almost a year now (chair manufacturer). The affect on product reliability has been profound though I must qualify that by saying it has meant going back to the textbooks (most notably Shigleys) but the results have been rewarding.

The following is a little case study of a chair frame (German design) that went from being a fragile “breaker” to a zero return “battle tank” after some careful redesign. Bear in mind also that we are not permitted to change the aesthetics of the chair and every other component (imported or local) must still fit perfectly. 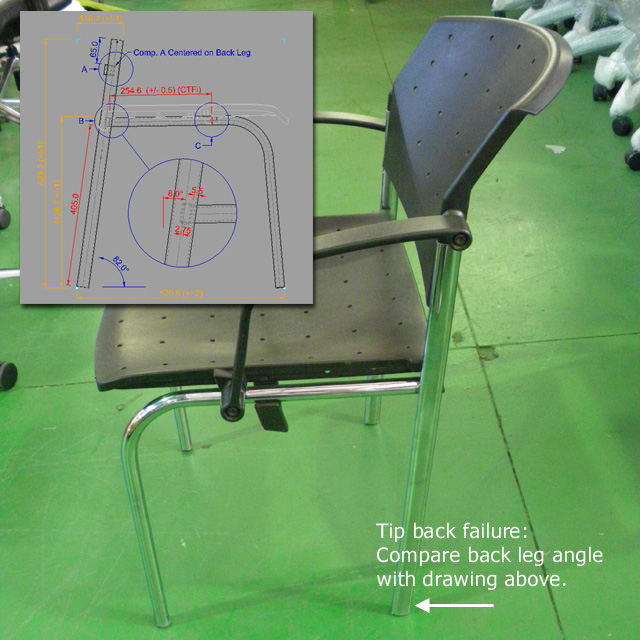 Pic 1 shows a chair with a broken frame (tip back failure). 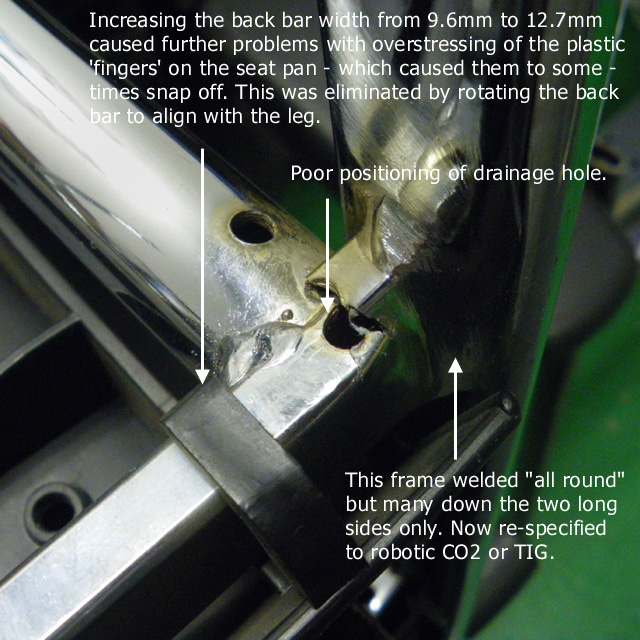 The weak point is the junction between the back legs and the horizontal frame members, as shown in pic 2.

The first thing addressed was the welding. Originally welded down the two long sides only, this was amended to “all round”. A calculation showed that doubled the strength – a good start. This is a manual CO2 weld but that will shortly change to robotic CO2 or TIG.

The second change was the section of the rectangular back member (the part broken in photo 2). Originally 9.6mm this was increased to 12.7mm (1/2”, wall thickness 1.6mm). This caused a further problem with the fitting of the plastic seat – the fingers used to clip it on being further overstrained, causing occasional breakages. This was addressed by aligning the back bar with the back leg (rotated through 8 degrees) – not how it was meant to fit but this works well.

The third change was to re-specify the steel (back bar only) to SAE1010 structural tube. Wall thickness only available as 1.5mm but the increase in strength more than compensates for this.

The DIN tip back test calls for an 85Kg mass to be placed on the centroid of the seat with the front legs raised 30mm from the floor. SnS analysis showed that the original frame just fulfilled that requirement – but it clearly wasn’t sufficient. The revised design fails at twice that load. A guideline (apparently) is that static stress loading only fulfils around 55% of the requirement of a cycled fatigue test. The strength doubling therefore came as good news.

Since these changes were enacted (9 Oct 2010) not a single frame (out of thousands) has been returned. The drainage hole has been moved over slightly (aligned with tubular member) but the electroplaters won’t budge further on that. My argument is that if the welding is sound, drainage holes aren’t necessary, but the frame is now reliable. 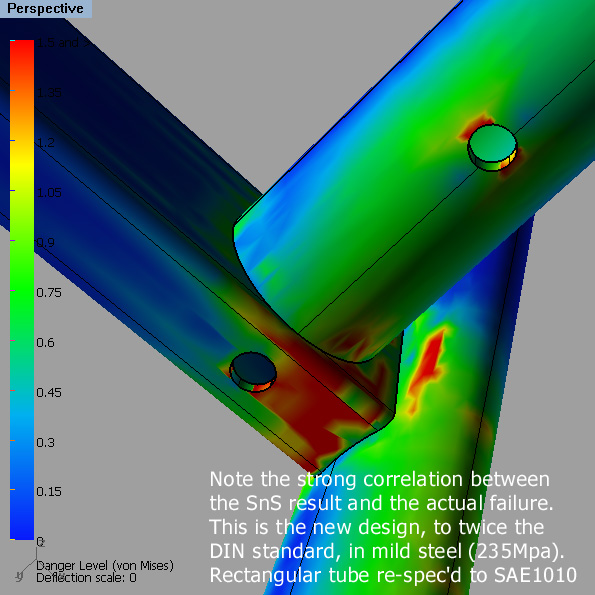 Pic 3 shows the close correlation between the actual failures and the SnS result. This is the new design, simulated in (235Mpa yield) mild steel. The final frame used SAE1010 for the rectangular tube and the wall thickness of the round tube was increased by 0.5mm. Increase in frame cost: R15.00 (US$2.22).

There are still occasional failures on the plastic back where the armrest meets the back leg but we are looking to localise that component – perhaps from polyamide (PA/Nylon) to glass fibre reinforced polypropylene (PP+GF). PP is manufactured in South Africa whereas PA is not, which helps keeps cost down. SnS will undoubtedly play a key role in that development.

Every new version of SnS has incorporated useful improvements. The programming team obviously listen to their users – a refreshing change. I have just set up my first strain gauge meter – th0se will be used in conjunction with SnS. For instance, where are the hot spots we need to pay attention to? Do the results (mathematical / SnS / strain gauge / displacement) corroborate?

An area of concern is recycled polymers. There is now great pressure to use recycled content but the people who write tender documents are blissfully ignorant of the loss in strength. We recently initiated a pilot program with the South African Plastics Recycling Organisation (SAPRO) to develop a national certification standard for recycled plastics. Recyclers will thus blend up pellets to match a datasheet. That can be used in SnS to help find the optimum recycled content for a given application. I can strongly recommend setting up a working relationship with such recycling organisations – there is a LOT to learn about how recycling really works.