Recently a user asked about calculating section properties of a pre-cast concrete beam he was working on.  So I modified this RhinoScript to compute the bending moment on a section plane positioned to intersect the beam.  See the following video to see the script in use.

The script works by intersecting the section plane with the solid beam that has SnS simulation data attached.  Numerical integration in 3D is easily accomplished using triangles, so we have the following sequence, automated by the script once the solid and section plane are selected by the user:

Numerical integration is performed by generating points (quadrature points) inside each triangle.  At each of these points the SnS component stresses are evaluated. 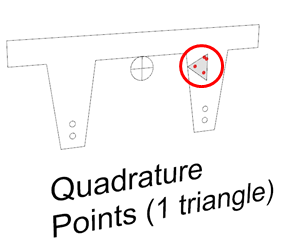 At each quadrature point, multiplying the component stress vector {SIGXX, SIGYY, SIGZZ} by the area and weight associated with the quadrature point gives us the force vector, F, acting here.  The little bit of moment (torque) due to this one force is computed by the vector equation M = R × F where R is the radius vector from the centroid of the trimmed section.  We integrate by summing up the contributions of all these little forces at all the quadrature points on all the triangles of the cross-section.  The output is a vector with 3 components comprising the 3 bending moments acting about a coordinate system located at the section’s centroid.

I've added the script to the examples in the documentation.  You can get the script here.